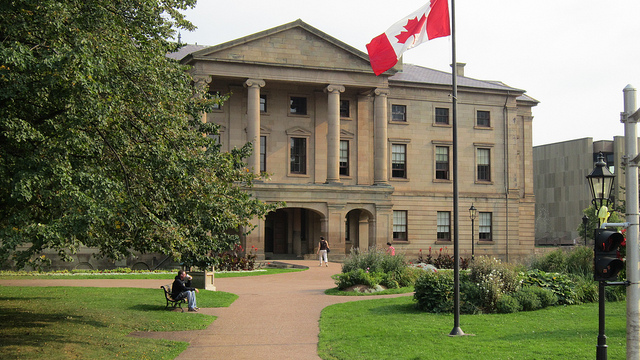 Over on a domain of his own, Lawrie has been posting about his attendance at the Digital Pedagogy Lab on Prince Edward Island and has written a series of blog posts about the event and what he learnt and experienced and the relevance to digital capability.

Digital Pedagogy Lab: Prince Edward Island, a conference for 60 delegates working across schools, further and higher education. A highly interactive event that generated over 6000 tweets in over three days, and involved remote delegates across 4 continents. This initial post from Lawrie frames the event, discussing nature of connectivism and rhizomatic approaches in education.

Connectivism and the tyranny of print

How much does our notion of content drive our learning environments. Dave Cormier wrote: Content is a print concept. It requires replication in the form of the printing press. It requires authority/power in the form of a government/agency/publisher deciding what is ‘required’ to learn. It is a standardization engine for learning, both to allow for spreading of authorized messaging and to allow for ‘uninstructed teachers to teach almost as well as an experienced one.’ Education, learning, should be a process– it sounds obvious, but when we look critically at the learning environments we have developed thus far, there is strong element of students engaging with content, not people. This is especially true in digital contexts. This post as already generated debate on both twitter and “the comments on the blog!”

The water cooler discussions are a key part of any conference, at #DigPed they were built in and reported upon. This was one of those discussions, led by a leading proponent of Open, Robin DeRosa. Underpinning the question was the issue of the data being open to each of the individual students, and the transparency of the algorithms associated with the analytics being used. If we make data open to each student, can we give the students the tools and the space to develop the capabilities to understand the data they are presented with? Could this be a way of framing a conversation with institutional staff about their learning processes?

Vulnerability in the Curriculum: No one cares about your soup!

Developing a digital identity is arguably a key element of working in the modern world. In this piece Lawrie links vulnerability and authenticity as being a part of developing that identity and asks the question how can we model vulnerability for students and integrate it into the curriculum.