It’s been a busy few weeks. I’ve been speaking about the new ‘six elements of digital capability’ framework at several events including the UCISA Spotlight on Digital Capabilities event , EdTech15 in Ireland, the Jisc Learning and Teaching Experts’ group, the Standing Conference on Academic Practice and the Acadamic Practice with Technologies conference at Greenwich (many of these links include the presentations). At Greenwich our work was even highlighted by the Vice chancellor and new Chair of Jisc, David Maguire, in his opening remarks. 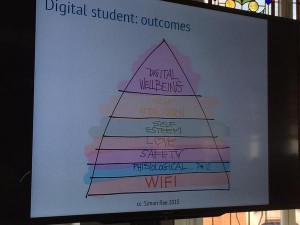 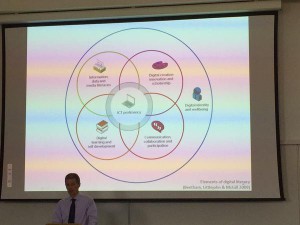 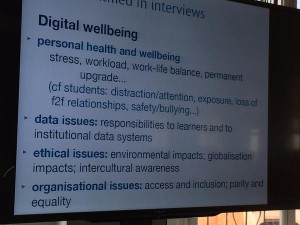 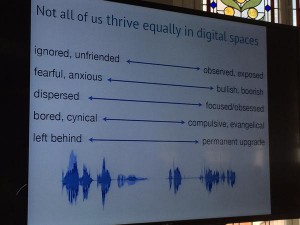 The six elements framework has been used in a number of workshops already, with around 50 FE practitioners and around the same number from HE. Esther Barrett, Jisc Subject Specialist for Teaching, Learning and Assessment, says: ‘The people who attended the workshop responded well to the model…Doing an activity for each theme helped them to understand each aspect better. Participants agreed that the model was helpful in illustrating the wide range of skills, knowledge and experience that make up digital capability.’ There have been two online chats organised – not by Jisc – about the framework and the wellbeing theme. You can find them under the hashtags #LTHEchat and #FOSchat or see this storify for the LTHEchat theme by Chrissie Nerantzi. And we have also made it onto the main Jisc blog from where the story has been widely taken up  through social networks.

While the framework was influenced by existing work, we are now seeing it being influential in its turn. The AllAboardHE team in Ireland have just published their own digital skills for HE ‘tube map’ which also has six elements, very closely mapped to our own, and we have discussed how we can work collaboratively to share our experiences of embedding digital capability frameworks into practice (more about this in the next blog post).

So what have I learned from all this discussion and feedback? Here are some key points for me.

1. The six elements model works for a lot of people across both HE and FE. The rationale for updating the previous model used by Jisc is clear, i.e. the inclusion of data literacy and digital ‘wellbeing’, and the move to broaden out ‘digital scholarship’ to include other kinds of innovation such as innovations to practice and process, design innovations and organisational change. The continuities with previous work are welcome, as is the comprehensive mapping to other frameworks.

2. There are lot of ideas out there about how the framework itself might be used in practice. These include: role analysis and description; recruitment, progression and appraisal; skills analysis; planning staff development; supporting organisational change. Originally the plan was for this project simply to inform other aspects of Jisc’s offer to institutions. But many institutions and professional bodies are keen to use the framework directly, whether that is mapping to existing frameworks or developing new resources that meet their particular needs. We’re taking some of these ideas forward in collaboration, but please get in touch if you have your own ideas to share.

3. The framework was meant to describe the capabilities of individual members of staff – academic and professional – but already stakeholders are seeing how they might use it with teams and departments. We are taking this insight into the process of tools development. Also, the framework can clearly be applied to students as well as to staff. Lou McGill and I both worked on the original LLiDA project, which focused on learning literacies but concluded that staff capabilities were key to students’ development. This time we wanted to be equally sure that the development of staff was grounded in learners’ needs and the general direction of travel for the purposes of education. We need a model of digital capability that works for people across post-compulsory education, and then more specific examples for learners, teachers, researchers, IT professionals, librarians, managers, careers advisers, educational specialists…

4. Finally, as the FELTAG findings made clear for FE, leadership is critical if staff capabilities are to be developed strategically. I was asked recently what I felt were the key elements of a digitally capable leadership. This goes beyond the findings of this project, but my answer was as follows:  (a) develop digitally confident leaders across the organisation, not just at executive level;
(b) have a clear vision but empower groups of learners/teachers/other staff to shape their own versions – versions that resonate with different subject areas,  professional specialisms, aspirations;
(c) focus on making good decisions for a specific organisation in a specific digital landscape, not on being proficient in the technology: of course this means having people in leadership positions (or close by) who understand the emergent technologies and the practical challenges of implementation;
(d) build a culture of individual thriving and wellbeing – recognising the diversity of needs and practices – within the digital organisation.

Comments welcome. Lawrie Phipps is taking forward Jisc’s offer to digital leaders, as he blogged recently. And Jisc is moving ahead with plans for some diagnostic tools for digital capability to support individuals, groups of staff and institutions. Watch out for some pilot projects in the autumn.

2 replies on “Raising awareness of our digital capabilities work”

I’ve been talking to our Senior Management Team about some of these developments and I now want to send them a link to the new six elements model as they wanted to look at this in their own time later. The version on the JISC pages as of last week seemed to be the old 7 elements one. What is the best thing to point them to that outlines the new model, hopefully with a brief explanation of each area.
Thanks

The first drafts of the work can be found here and as we progress the project updates will be posted to the main Jisc website here.